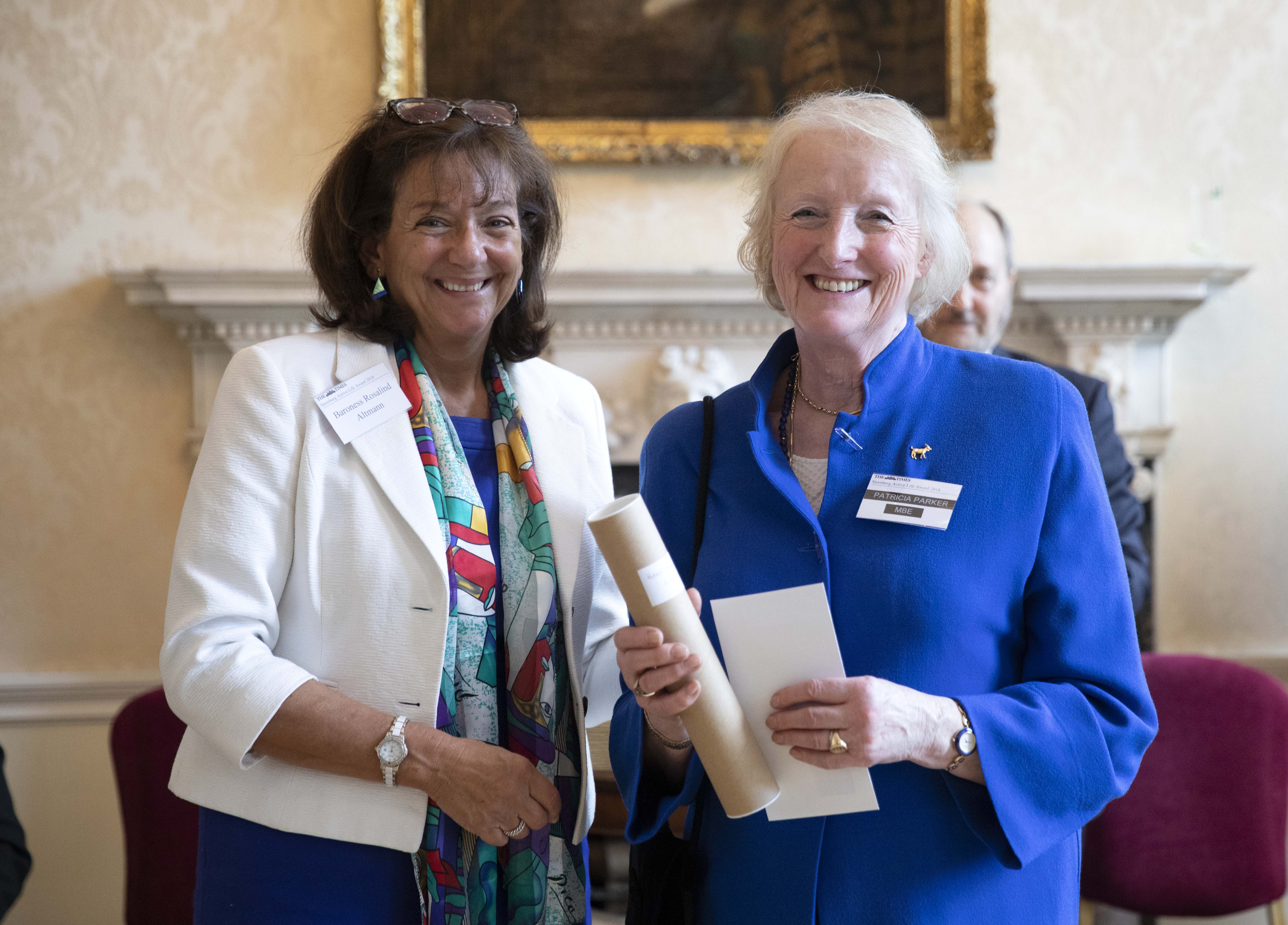 “For some people turning 70 represents time to slow down, scale back on their activities and start putting themselves first. Other exceptional people, however, do the opposite and continue with or even step up their involvement in the communities or causes that matter to them.”

Patricia Parker MBE, 71-year-old CEO and Founder of Kids for Kids, had the honour of being named Runner Up in The Times/Sternberg Active Life Award, recognising the achievements of those over the age of 70.  Patricia and colleagues were welcomed by The Sir Sigmund Sternberg Charitable Foundation together with The Times Newspaper to 11 Downing Street, by kind permission of the Rt. Hon. The Chancellor of the Exchequer. Winner of this year’s Award was Denis Rutovitz (90), who started Edinburgh Direct Aid in 1992 and has made many trips providing urgently needed aid all over the world – from Kosovo during the Croatian War of Independence to Kenya to help AIDS orphans to Sri Lanka post Tsunami.

Patricia said, “I am hugely honoured to be named Runner Up to such an outstanding man. It was such a pleasure to meet him and learn what he continues to achieve. I am also thrilled for Kids for Kids. Being recognised by such a prestigious Award will I hope raise the profile of the forgotten children of Darfur who live in such deprived conditions. For this to happen now, when Sudan is in turmoil, is perfect timing. Whoever ends up running Sudan has enormous challenges to face, and because Darfur is so far from the capital it has always been the last to receive help of any kind. This recognition will help spread the news of the life-saving sustainable projects we provide to remote communities, transforming the lives of children long term.” Patricia has donated her £1,000 Award to provide more help to children in Darfur.

The presentation ceremony at Downing Street on Tuesday 21st May heard from Baroness Altmann about distinguished earlier recipients of the Award, as well as from Michael Sternberg from the Sternberg Foundation who reminded us of the many people across history whose greatest achievements have been when others might have stepped back into retirement. Mr Rutovitz gave a moving speech about the importance of getting more older people involved in helping those around the world in great need. After returning to Edinburgh after his first visit to Bosnia, Denis realised that there were many people willing and eager to help by fundraising and donating, and that not only was he going to continue helping those in need, his work would be helping those looking for a way to help. Patricia too found that it was not only children in Darfur whose lives Kids for Kids is changing. “It is a privilege to speak to children here. They are excited and empowered by finding that raising even a little money themselves makes a real impact on children their own age living such different lives. It gives them hope and helps them realise that you are never too young – or too old – to make a difference!” said Patricia.

The Times/ Sternberg Active Life Award was set up in 2008 by Sir Sigmund Sternberg, a British- Hungarian businessman, inter-faith campaigner and philanthropist, in conjunction with The Times. He died in 2016. This year’s judging panel included Sir John Ritblat and Sir Tom Farmer, the businessmen, and Craig Tregurtha, group managing editor of The Times and The Sunday Times.

For More Information or to use any Photographs please contact Sage Lancaster: sage@kidsforkids.org.uk, 07528 194495