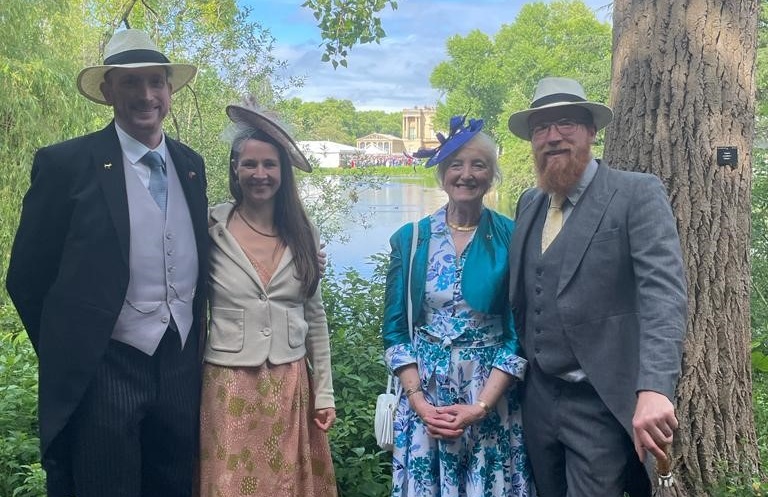 Kids for Kids goes to The Palace!

“What an amazing treat Alastair and I had on 25th May!  This year Kids for Kids has been honoured with an OBE for  the support we provide for children in Darfur, and the work we do with children here, showing them how they too can make a difference in the world.  It’s the first formal recognition that the children in our villages are not forgotten.  I cannot tell you how much that means.    To have received this Honour too in such an important year as the Queen’s Platinum Jubilee is particularly special.

To celebrate, I was delighted to be invited to a Garden Party at Buckingham Palace, joined by my sons, Alastair and Douglas, and daughter-in-law.   Running Kids for Kids for 21 years has taken its toll on family time so you can imagine what a joy it was to be able to invite them to be with me.  I have put some of the photographs from the day below.  The garden is huge and a haven for wildlife in the centre of London.   It was of course very special that members of the Royal Family joined us.   Kate looked stunning – her beautiful hat and floaty eau-de-nil dress were of course wonderful. But Prince William was a surprise – he looked so much younger and slimmer than images we see in the press and on television!

We had an unforgettable day at Buckingham Palace, meeting really special people, all of whom had served the world in some way.  For me it was particularly moving that it was all because of one small child whose life seemed beyond hardship.   Now, because of him, there are 110 Kids for Kids villages.   His small son is at our kindergarten in his village.   There are handpumps there.   They grow vegetables.  And of course, he drinks goat’s milk!   And I went to Buckingham Palace!  I could not have imagined any of that 21 years ago!

Thank you so much for all your support over the years – without you none of this would have happened!”