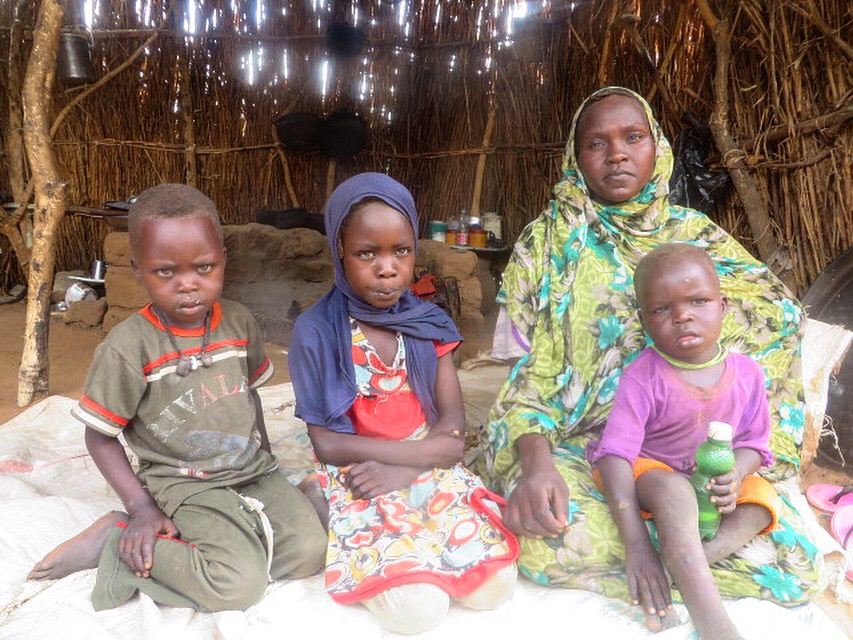 Enterprising Woman of Jafaina Thinks Towards her Future

We are so proud and delighted to hear stories of the women in our villages who are doing remarkably well, and creating a future for themselves and their families. We wanted to share with you one recent story, from Jafaina Village in the south of North Darfur, which we adopted only last year in 2018, and which is already showing significant changes towards a better future.

The photo above is of Hawa, 32 years old, married, with three of her five young children.  Hawa’s husband is a farmer. In September 2018 Hawa received five goats and one local breed donkey from the Animal Loan Committee, along with basic essentials including two blankets and two mosquito nets to protect and keep her family warm at night. Kids for Kids also provided vaccines for the animals, anthelmintic and worming treatments.  Preventing disease is essential to enable Hawa to build up her flock.

After the rainy season last year Hawa’s goats produced two kids and this year they produced five more kids! After just one year, Hawa now has 12 goats in total – and four of her nanny goats are currently pregnant!   She has done very well in keeping her promise to take good care of her animals – the same promise that all Kids for Kids beneficiaries make before receiving help from the Animal Loan Committee. Hawa has made sure that the goats have access to an area of shade from the hot desert sun at all times. She made sure to collect bits of trees, grass, and dry fodder so that she could create a Tabana near her home where the goats can graze. The goats have provided milk to feed her children, plus yoghurt that she has made to sell in the market!

Her donkey has been a great help in bringing water from the hand pump, as well as helping to plough the farm. Hawa’s husband has been able to harvest a variety of items on a further 2.5 acres of former scrub grass land including more of the staple crop millet, tomato and okra. Hawa’s donkey has also made it possible for her two eldest children to attend Kindergarten in Turra village, which is 6km away.

After the next goat rotation happens, and five of Hawa’s goats are passed along to benefit another family in the village, Hawa wants to once again increase her flock so that she can sell extra billy goats, keeping the female goats to provide milk for the family and sell yoghurt and butter in market.   Once she has ‘paid back’ her goats the flock is hers – and for the first time ever she will be able to make decisions for her family.

One really exciting thing that Hawa has been doing is making handicrafts from fronds (a tough grass grown in some parts of North Darfur).  Fronds are used to create the material for the roofs of houses, woven together to create trays to cover food, baskets, and sometimes even handbags. Hawa has been making mostly baskets and food covers to keep the flies away, which she has been able to sell at the El Fasher and Turra Markets to earn an additional income.

Most of the Kids for Kids villages are in the north of North Darfur, where the need is greatest, and where these fronds do not grow, as the conditions are much harsher, hotter and drier.   This means Hawa is one of few who have been able and enterprising enough to take advantage of these materials, to engage with another way of earning an income to support her family!   Life is really tough in Darfur but Hawa is showing how to make a real lasting difference for her family.   Good luck Hawa!